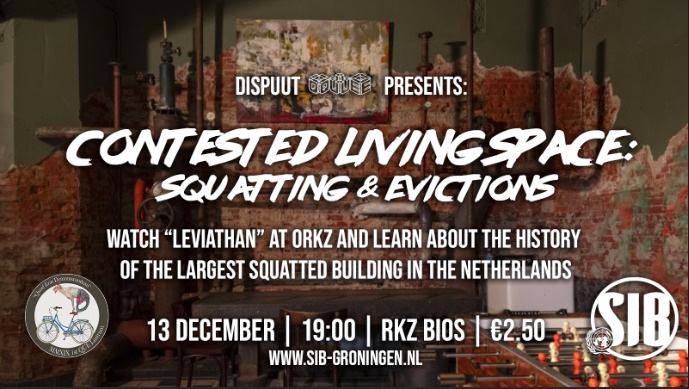 Squatting might sometimes seem to be an issue of the past, but it still is relevant globally, as many poor and homeless people remain on the lookout for affordable housing. Think of the favelas in Brazil, rooftop slums in Hongkong, or the refugee squats in Greece. Groningen also has a distinct history of squatting. It is home to the ORKZ (the Old Roman Catholic Hospital), once the biggest squatted building of the Netherlands, which was legalised in 1985.

On 13 December we will get a tour through this building, as well as a talk about its history and its place in the broader societal context of squatting. After that, we will go to the building’s own cinema to watch the film “Leviathan”, a 2014 Russian drama film directed by Andrey Zvyagintsev.

“Leviathan” tells the story of Kolya, a man living in a Russian coastal town, who is forced to fight the corrupt mayor when he is told that his house will be demolished. He recruits a lawyer friend to help, but his arrival brings further misfortune for Kolya and his family. The film recounts a personal tragedy inspired by a real-life (American) example, but it also deals with some of the most important social issues of contemporary Russia: power, money and insecurity. It has won many prizes, including the 2014 Cannes award for Best Screenplay and the Best Foreign Language Film award at the 72nd Golden Globes.

Afterwards, you can join us for a drink at the ORKZ Bar (note: cash only!).

This activity is organised by Dispuut QUE in celebration of their first Lustrum.