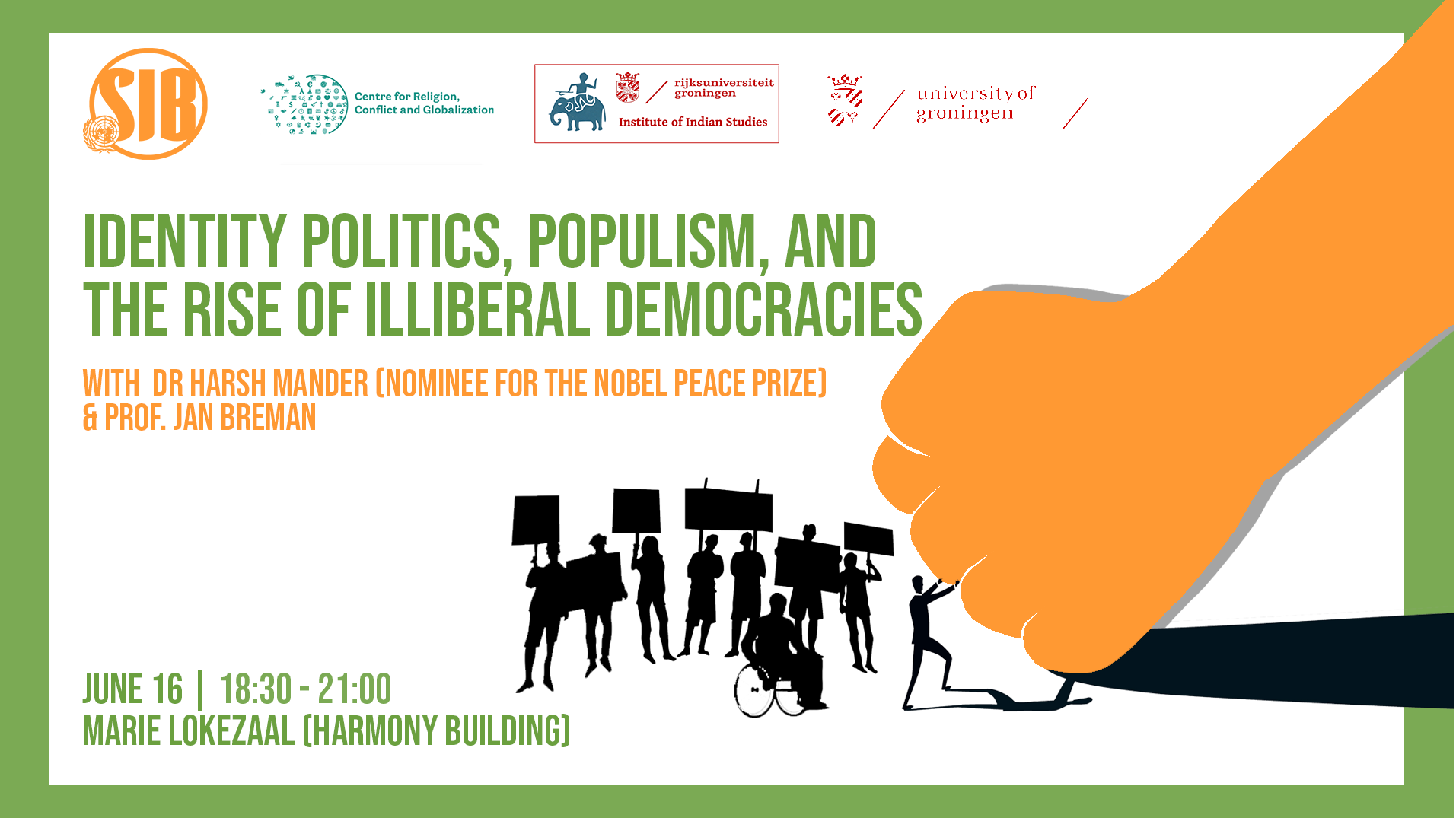 On 16th June, the Centre for Religion, Conflict and Globalization, the Institute for Indian Studies (Faculty of Theology and Religious Studies) together with University College Groningen, and SIB-Groningen will be hosting a discussion evening on the topic of  ‘Identity Politics, Populism, and the Rise of Illiberal Democracies’.

The discussions will benefit from the presence and participation of two highly notable speakers Dr Harsh Mander and Prof. Jan Breman.

The event is part of a triptych, for which the departments in UG, the University of Amsterdam and the International Institute of Social Studies in The Hague (part of Erasmus University Rotterdam) are working together to host lectures, seminars and discussion evenings from the 13th to 16th of June. At all three events, renowned Indian human rights activist Dr Harsh Mander will talk about his work and about the complex, divisive intertwining of political and religious identity in contemporary India. While emeritus professor and India expert Prof. Jan Breman will present his new book(co-written with Ghanshyam Shah) titled Gujarat, Cradle and Harbinger of Identity Politics: India’s Injurious Frame of Communalism.

Dr Harsh Mander
Dr Mander is a renowned Human Rights Defender from India, currently at-risk. His work in India with minorities, migrants, and vulnerable communities in a quest for justice is globally known. He campaigns for the rights of religious minorities in the country and opposes all forms of extremism and violence. In 2017, he started the Karwan-e-Mohabbat [The Caravan of Love] to combat growing intolerance in India by showing solidarity with the victims of identity-based violence. Dr Mander is recently shortlisted for the Nobel Peace Prize 2022 by PRIO, and is currently a Richard von Weizsäcker Fellow of the Robert Bosch Academy in Berlin.

Prof. Jan Breman
Prof. Breman is a Dutch sociologist and an emeritus professor at the University of Amsterdam. He was appointed extraordinary professor of development sociology at the Institute of Social Studies. His Valedictory Address was entitled ‘A Question of Poverty’. Prof. Breman continues to be affiliated with the Amsterdam School but is also a Fellow of the International Institute of Asian Studies. Spread over a period of forty-five years Jan Breman has conducted anthropological fieldwork in India (South Gujarat) and Indonesia (West Java), mainly on rural and urban labour and employment. The outcome of his research has been published in books and journals.

A panel discussion will be facilitated by Dr Elena Mucciarelli and Dr Ritumbra Manuvie. The panel will be moderated by Coen Kompier, a UG alumnus who worked as a senior expert at the International Labor Organization in India for 16 years.

The event will be held in English , on 16th June 18.30 hrs onwards at Marie Lokezaal, Harmoniegebouw, Oude Kijk in Het Jatstraat 26, 9712 EK Groningen.