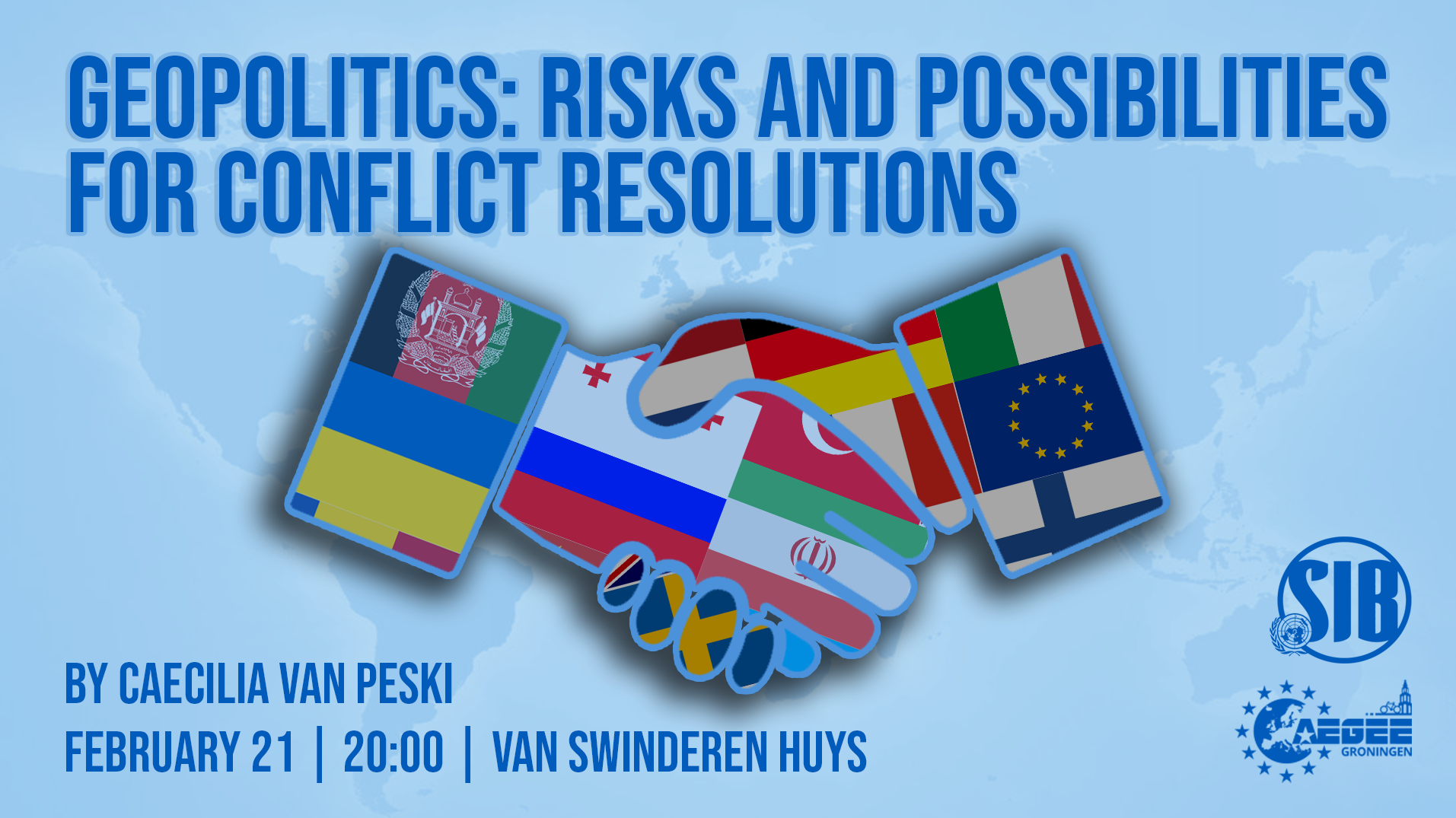 Join this event →
Europe is increasingly required to assume greater responsibility for its own well-being and security. In the first part of the lecture, Caecilia van Peski will address issues regarding peace and security not only in Europe but as well as around the world. The talk starts with the perception and awareness of risk and threat in today’s society. Examples will be given both from the national, regional as well as international levels (Afghanistan, Ukraine, Georgia, Russia federation), all with respect to changes in geopolitical realities. Together with the audience, the speaker will explore the concept of strategic autonomy for Europe.
The second part of the event will point at opportunities for Modern-day Conflict Resolution by use of the UN Agenda 2030 and the Sustainable Development Goals. Specific attention will be given to SDG #16 (Peace, Justice and Strong Institutions), which promotes peaceful and inclusive societies for sustainable development, providing access to justice for all and the building of effective, accountable and inclusive institutions at all levels. Specific attention will be given to the importance of (individual, community and societal) resilience.
This lecture is organised in collaboration with AEGEE-Groningen.
There are limited places for this event, so make sure to be there early as it will be first come, first serve. It is mandatory to wear a face mask and show a valid QR code and ID for this event.
Speaker’s biography
Caecilia Johanna van Peski (The Netherlands, 1970) holds an MSc degree in Educational & Cultural Psychology from Tilburg University (2001), an MA degree in Civil-Military Interaction from the German Military Staff College in Hamburg (2021), and a Postgraduate Diploma (PgD) in Border Security and Management for Senior Leadership from the OSCE Border Management College in Dushanbe, Tajikistan (2021). She is a Commander in the Royal Netherlands Navy, Military Veteran and authority in the field of Security & Defence, Civil-Military Interaction, Democratisation & Elections and Justice & Equality whose achievements have received national and international recognition. Recipient of the ‘Ambassador for Peace’ Award granted by the Universal Peace Federation (2010), she is regarded as being among the most influential women of her generation in the Netherlands – listed as one of the ‘Viva’ top 400 (2009) and among the top 100 of ‘Opzij’ (2010). In October 2010, she was appointed UN Special Representative for her country, addressing the 65th United Nations General Assembly in New York with her statement ‘Deepening Democracy’. She has worked for (inter-)governmental, multilateral organisations, amongst which the Netherlands Foreign Office, the United Nations (UNDP, DPKO), the European Union (EEAS), the European Commission (EIDHR), the Organisation for Security and Co-operation in Europe (OSCE/ODIHR), NATO, and DCAF-ISSAT Geneva. She holds a number of governing positions, amongst which for EuroDéfense Netherlands (Secretary General), the Dutch UN Association (Chair Advisory Council) and – after receiving critical injuries whilst on mission – emerged a champion for the interests of (wounded) military personnel through her involvement in several associations of military veterans (Advisory Committee). She is a sought-after (university) lecturer/teacher, with appointments at Juniata College (US), Fordham University (US), Sungkyunkwan University (Korea), Bergen University (Norway), the NATO CIMIC Centre of Excellence in The Hague and the Netherlands School for Peace Operations. 2019-2022, she is appointed Fellow at the Baker Institute for Peace and Conflict Studies in Huntingdon, PA, US. She has worked in over thirty (post-)conflict countries. Her geographical area of operations lies mainly in the Central and South Asian/Caspian Region, the Russian Federation, the Caucasus and the Balkan Area. Through her work on SDG 16 ‘Peace, Justice and Strong Institutions’, she actively contributes to the building of peaceful and inclusive societies for sustainable development.